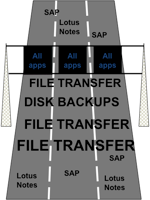 [In part 3 I will review a number of senario's to resolve these issues using WAN Optimization and Acceleration techniques]
Posted by wilfried van haeren at 8:29 AM No comments: